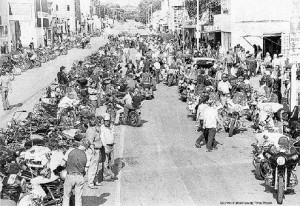 1938- The Rally Begins…The first Sturgis® Rally, known as the Black Hills Classic was held on August 14th with a race of 9 participants and a small audience.

1942- Due to gas rationings in support of the war efforts the Rally did not take place.

1961-The Jackpine Gypsies introduce the Hill Climb and Motocross races.

1964-One block of Main Street is officially closed for motorcycle parking over the course of the 3 day event.

1975- The Rally evolves to its present 7 day event

2012- Attendance of 445,700 with participants from all 50 states as well as Canada and dozens of other international communities including Japan, Australia, Germany, England, etc.

2015 – 75th Anniversary-Pam and Chad Seng are going for the first time and leaving Ashley behind to work with the Chariots of Fire crew!

Wishing you a fun filled trip; With preparations complete a couple of last minute things to keep you safe. Check tire pressure daily. Use octane boost “Rocket Fuel” for those times when the only gas station for miles and miles and miles only has 83 octane…..