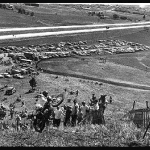 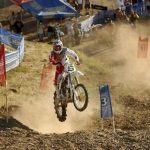 Sturgis, A Bit of History by Biker Bunny

What draws you to Sturgis?  Is it your first time and you want to see what all the hoopla is about?  Is the shear mass of motorcycles all in one spot you enjoy?  The camaraderie?  The live bands, Buffalo Chip (a city unto itself), Full Throttle Saloon (now across from the Drag Pipe Saloon), Mount Rushmore, Deadwood, Devil’s Tower, or are you like me and want to enjoy the magic of the Black Hills?  Notice on my list I don’t have Sturgis Racing.  In the eleven years that we have been operating Chariots of Fire Customs LLC, not one person has told me a story about going to the races at Sturgis and yet that is one of the very first events.

For those of you that don’t know, in 1936 JC “Pappy” Hoel opened up an Indian dealership in the Sturgis area.  The following year Pappy and fellow riders found the Jackpine Gypsies MC.  The club became an official charter of the American Motorcyclist Association hoping to increase community support for riders in the area.  The Sturgis Chamber of Commerce teamed up with Pappy and the Gypsies to build a half-mile dirt track for motorcycle racing recognizing the benefits of bringing riders into their community.  In 1939 more than 800 riders turned out to watch nineteen riders duke it out for $500 prize.  The races continued to grow and expand to include stunts and hill climbs during the ‘30s and ‘40s.

As the rally grew, so did the events and the rally itself.  It went from a two-day event to a three-day event in 1964.  It wasn’t until 1975 that the Sturgis Rally grew to its current seven-day event.  The emphasis on racing began to recede in the ‘70’s with choppers and custom iron bikes taking over the town of Sturgis.  And not in a good way as stories have been told of toilets, bikes and even streets getting doused in gasoline and set on fire.  The early ‘80’s brings about venues outside the town such as the Buffalo Chip.  Every year the rally grows.

Racing, the sport that started it all still remains an integral part of the event. Initially, the event began with a half-mile race. There are half-mile races yet today, in both Sturgis and Rapid City. The racing side of the event has expanded to include ADBA drag racing at Sturgis Dragway as well as professional and amateur hill climbs at Bessie’s Knob Hill.  So who will come back with stories about the racing?  Will you go to the half-mile AMA All Star Professional race on Monday, August 8th or the vintage racing featuring the old board trackers on Tuesday?  Maybe the hill climbs will draw your attention.  The prize money is at $10,000 and they are hoping to increase it to $20,000 in order to attract top national racers.  A far cry from the original $500!  For more information go to: http://www.sturgisdrags.com . Looking forward to hearing about your Sturgis adventure. 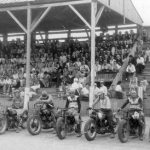 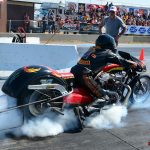