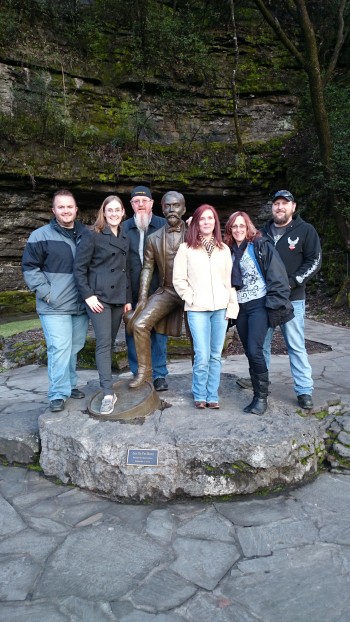 Posing with a larger than life statue of Jasper Newton “Jack” Daniel in front of the natural, limestone filtered spring they still get water from today.

For the past six months we have been promoting our Tenth Anniversary commemorative bottles of Jack Daniels Single Barrel Select. Jan, myself, Jack connoisseur and son-in-law Clayton, daughter Marie as well as Mike and Pam Collins set out for Lynchburg, Tennessee early one Saturday morning.  Mike was the catalyst for this trip as he invited us on a tour of the distillery last spring.  The mood of the morning was a little sleepy, however, as the day progressed anticipation and excitement grew.

We drove straight through to Lynchburg, TN, which gave us plenty of time to enjoy a nice “grilled cheese on crack” sandwich at the Barrelhouse BBQ restaurant.  It was only a short walk from there to the distillery.  Our host, Jason, made us feel very welcome. The private tour started with photo ops.  We then walked across the property to the flag pole where the Jack Daniels flag was flying in our honor.  Next we headed to the Bethel house where the selection took place.

The Bethel house is the home of the first visitor’s center.  The mood was set.  There was a long table set up at the far end of the room with a large fireplace behind. Three small brandy shaped glasses were set and filled with caramel colored whiskey at each of our seats. As we got settled, Jason pointed out the barrel wall we walked through upon entering the room is made from the first barrels cracked open after prohibition.  Cool huh?

Jason shared his passion for tasting by first explaining the process.  Master selectors pull a hundred barrels and look for three flavor profiles; caramel, vanilla and toasted oak.  Barrels that meet these flavors are then left to age another year or two.  Seven master tasters determine if a barrel is worthy to become single barrel select.  Less than 2% of Jack Daniels sales are single barrels. And we got one!

Swirling, smelling, tasting.  With detailed instructions from Jason we used our olfactory sense and taste buds to make the selection.  Each glass was carefully tested and tasted and tasted again! The room was quiet as we each concentrated on our senses.  After a bit I asked each person to push one glass away per Jason’s initial suggestion to first eliminate one glass.  Down to two, we then swirled and smelled and tasted some more. Then the dialog began. Words were used to describe each glass; spicy, mellow, vanilla, harsh, smooth, caramel, strong, bold, warm.

In the end, after much deliberation, we chose barrel number ten.  Only after cheers, congratulations, pictures and hugs did it hit me. We picked number TEN, celebrating our tenth anniversary, it was meant to be!

So what is it smooth, spicy, vanilla, bold? Watch our video for the official taster’s description of barrel number ten and to see photos of our private tour.